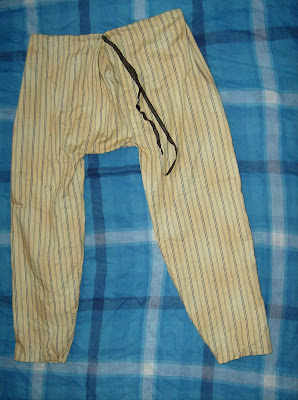 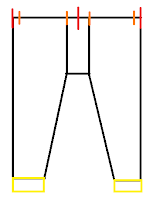 Construction-
These pants are simply constructed. It was created from left over cotton from another project. The fabric was already cut into 4 large tapered triangles. I cut the points off of the bottoms, and near the top. The bottoms were cut just to be a couple inches larger than the boy's ankle, which gave just enough height to reach his waist. The extras that were cut off were used as crotch gussets.

The whole garment was then hand sewn using the same techniques as in the green tunic. I had a black velvet ribbon hemmed inside the waistband to act as a drawstring.

The white diagram at the right shows the general layout of the seams. Because this ended up being very very baggy in the waist I put in four large box pleats, (the red and orange lines in the diagram) before I hemmed the waistband. These pleats made it so there was less bulk at the front when the child tightened the drawstring, but still allows for maximum movement. Plus it was a time saver to redoing all the finished seams in the crotch and sides.

Important- when hand sewing make sure you baste your garment together and try it on before you finish all the seams... Because you will not want to rip out finished seams that took you almost two hours to complete....

Things I would do differently-

I would make the legs straiter and a bit longer if I would have had the fabric to do so. This would have made the waist a bit smaller and the ankles a bit bigger. As is the way it was cut I would have only needed a small diamond gusset at the crotch for my bean pole child. Because of the room at the ankles and where the waist sits there is not a whole lot of upwards growth space. As is I will be adding a couple of inches to the ankles, because after watching my son run around in them for the last hour, I have realized that they show plenty of skin if he sits or brings his knees up, even though they are perfect when standing. Most of these things are due to fabric limitations.

One major thing I should have done was to baste the garment together and had the child try it on before finishing the seams. I would have been able to remove bulk from the waist that way. I should have undone my seams, removed the extra fabric, and refinished them instead of putting in the pleats. But I could not bring myself to redo that much work for a child's pants.

What Is period about it?
Well the hand sewing techniques are period, there was known to be yellow dye in viking times. There have been found pants with more than one color, so it is not to unfeasible to have narrow stripes. The fit may be a bit to baggy for viking pants, but I would expect to see a child's garment with some space for growth in period. Although there is evidence for strait legged pants- Damendorf trousers, Skjoldehamn trousers,

What isn't Period about it?

The fabric is cotton, which is again is rare if not non exsistant in Viking Europe, wool linen and silk were all found. The crotch gusset is much simpler than than many extent trousers. Also black was very hard to achieve, so black stripes may not be feasible, although a very dark blue/black could have been achieved. 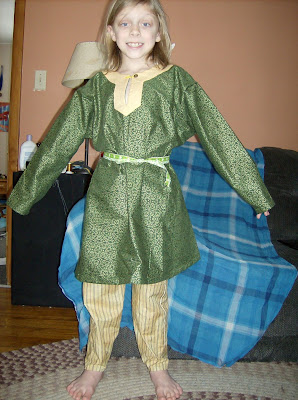 But all in all not a bad pair of light weight pants for playing at summer camping events, and considering the price I am not complaining. The out fit is semi-plausible  The child is happy and he won't go naked at events.