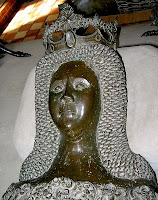 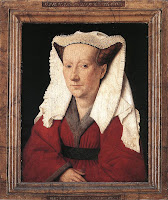 I am contemplating creating a ruffled veil (eventually). So far most examples are from northern Germany, Switzerland, Denmark and The Netherlands, with few English. Most of the dated art work is between 1320 and 1500, which is perfect time for my persona, if a bit out of location...

There seems to be three different styles of frilled veils. Simple ones, with only one or two frills or ruffles. Goffered veil or Nebule, which is more of a hood with face framing frills and surrounding the hem. And the many layered ruffle veil like the lady in the red houp above.

I want to create a veil with just some simple ruffles, like the one at the right. Or go here and click on the image to get a zoomable version. This type of ruffled veil seems to most versatile, It can been seen worn under other veil layers, or by itself in the early 1300's, and as part of more elaborate headdress of the 1400's.

The following are some other blogs and sites with some more examples and construction of ruffled veils.