So I have been busy in mudane life and otherwise occupied, the past several weeks... I have however have got my son's linen outer tunic washed several times and is waiting to dry to be cut out. I have learned how to turn a toe or heel when knitting socks, and I have learned how to play with Henna, and started on making a tapestry (more about that in the next post). 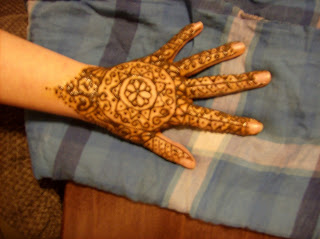 Playing with henna was fun! Henna has been used for centuries to dye skin and hair. The Henna I have is just the bulk herb, so I mixed my own paste, with lemon juice and water (The water should have been omitted  I had mixed it up with the hair dye recipe) to a thick yogurt consistency. After it sat for several hours to release the dye, I added a touch of tea tree, (to darken it) and table spoon of sugar (to make the paste smoother). I made a small cone out of one of the packing bags and a small straw, and used it to create some free hand designs on my hands. Above is a pic of this stage.

After about 45min I ended up flaking the henna off, I should have tried to keep it on my hand longer and try to seal it in for a darker color, but I was busy. Traditionally it would be left on all day or overnight. The henna had been a light reddish brown stain. I went to bed and woke up the next day to it being several shades darker, more of a solid brown, not quite as dark as the picture with the henna on my hand. The stain lasted about 2 weeks before being completely gone. If I would have omitted the water, let the henna mix sit longer, added a bit more tea tree, and sealed it to keep it on my hand longer, the henna would have been darker.

I also used Henna in my hair. I made a paste with 300 grams of henna powder, 3 tablespoons of lemon juice, and enough hot water to form a thick yogurt consistency and let it sit for 6 hours to release the dye. This ends up looking like a huge amount of mud to put in you hair, compared to chemical dyes, but you need enough for the thick paste to coat everything. Since I have thiner hair I was able to use less than the recommended amount, and this was just enough to evenly coat my hair.

Afterwards I slowly worked the paste into my
sectioned and damp hair starting at my roots. Making sure to coat every strand took almost 45 mins. I also used some chapstick around my hair line to prevent my skin and ears from dying. You should wear gloves otherwise your hands will also be red. I didn't have any gloves on hand so I had reddish hands for a few days, frequent washings will lighten it up quicker, but my finger nails are still dyed a reddish tone (5 weeks later), which is slowly growing out.  Then I wrapped my head in a plastic bag to hold in the heat for about three and a half hours. The henna smelled like spinach, with a touch of lemon, so much more pleasant than chemical dyes!

The Henna was harder to wash out than chemical dyes- it's ends up being a crusted mass of mud. It took over 45 mins in the shower to get clear water. Make sure to use a good conditioner while in the shower.

After my hair was dry I was amazed at how soft my hair had felt. It also looked like I had coated my hair in bight shinny new copper before it has a chance to darken. In the sunlight my hair glowed! Henna darkens after a few days, especially if you do not use soap for a couple of days. Watch out because even on my second and third shower afterwards I would have red water at the start of my shower. Four days later my hair had darkened to the color on the right. I would have preferred a bit darker color, so next time I believe I will let it sit longer, plus it is my understanding that every time you dye your hair with henna it becomes darker and more natural. We'll see.

Now five almost six weeks later my hair has faded a bit, it is now a natural looking light auburn color, although it still can look like it is glowing sometimes in the bright sunlight!

This color has faded so much less than chemical color reds. Normally I dye my red hair darker than the henna did, and by the time six weeks go by the color is just a light strawberry blonde, just a touch more red than my natural color. Plus I have less split ends! So far the only downside is the fact that you can actually tell I have blonde roots....
Posted by Raven Rose at 4:08 PM

Email ThisBlogThis!Share to TwitterShare to FacebookShare to Pinterest
Labels: Henna