Wow! it's been a long time. A lot has been happening in my mundane life since my last post. I got a new job and we bought a 150 year old house on some acreage halfway across the state. So I've been busy with moving a homestead (including livestock), repairing/improving the house, and lots of overtime at my job. Needless to say medieval stuff and the SCA ended up on the back burner. I have been dabbling with some mid-century clothing and styles, some knitting projects, and a bit of garb research.

So on to the topic of this post- not really medieval or garb related but quite a few of my SCA friends use Henna for hair dye or body art. 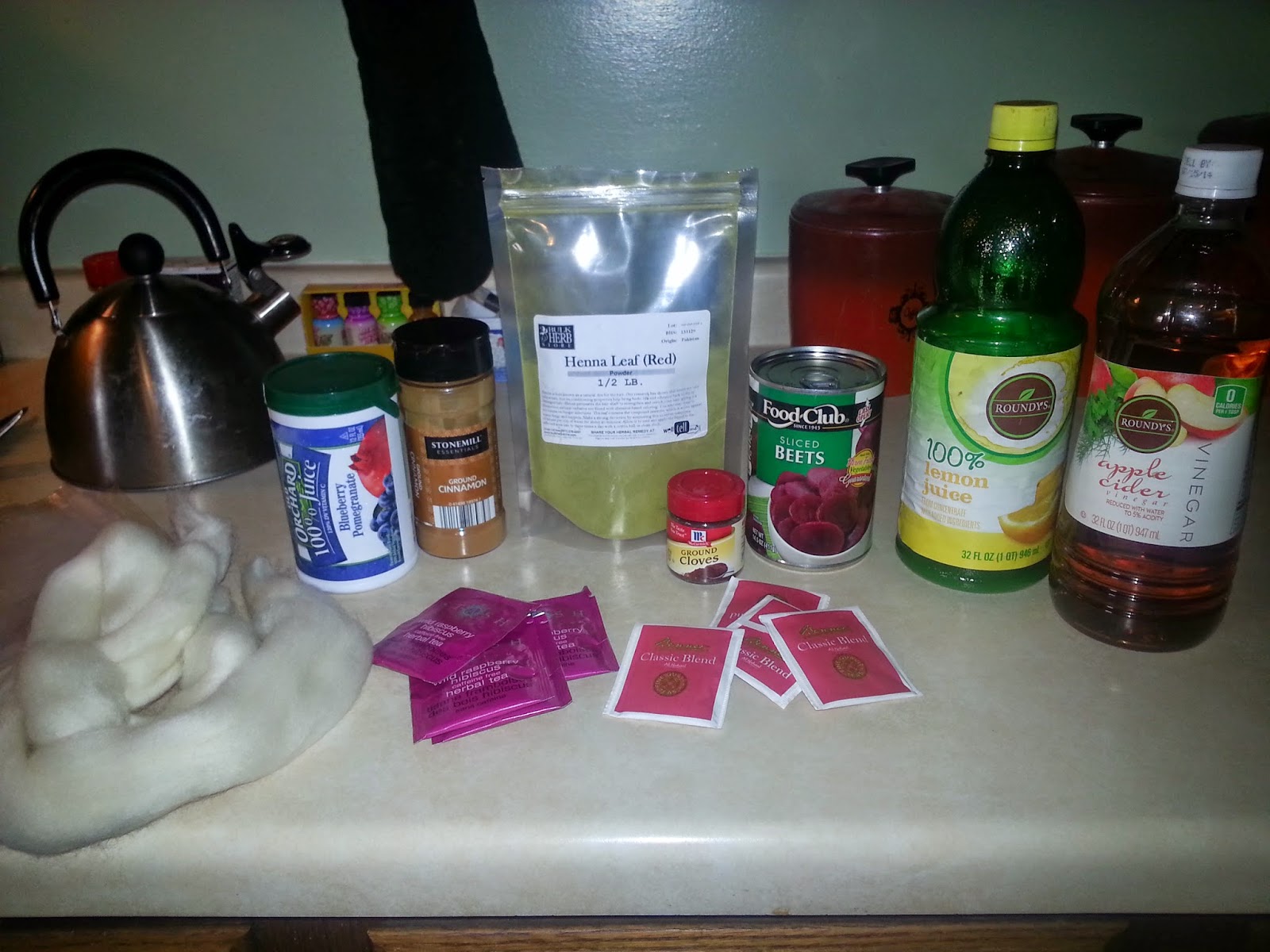 So I have been coloring my hair with Henna for almost 2 years now. I love how henna strengthens and conditions my hair. My hair was in the best condition it ever was- and I decided to get a perm. I like curls but getting them to stay in my hair is near impossible without overnight wet sets. Well the perm didn't take the first time around so the salon offered to to do another one for hard to perm hair. This second perm gave me nice waves- not quite curls. It made putting curls into my hair so much easier- and if I did a wet set they stayed for 2 days!!! But the double perms fried my hair and a few months later I chopped it to my shoulders. My hair with the help of the Henna is recovering. I am on the fence about weather or not I will get another perm in the future.

I've been wanting to do something slightly different with my hair. Up to now I have been doing the same recipe with the Henna as I did the first time. Warm water with a tablespoon or two of lemon juice- and a couple drops of Tea Tree to terp after dye release and letting the mud sit on my head for a few hours. It always left me with a warm light auburn color like the pic to the left. Because I waited quite a bit of time between treatments and never left it on for very long it never really darkened like Henna is apt to do. My skin tone is quite fair and slightly cool. I can do this color okay- but it seems to bring out more ruddiness. I think that if I had some cooler tones in the hair it might be better against my skin. A bit more of a burgundy- but still somewhat natural looking.

I been lurking around the long hair community in the Henna forum. Often times there are several different additives that have been used to achieve a more burgundy color.  Red wine, beet root and hibiscus seem to be the most popular. I have also seen mention of grape juice, pomegranate juice, cinnamon and cloves. Both black tea and coffee have been used to achieve a more brown color.  Indigo is also common to use with henna to obtain darker brown colors. Lemon juice and apple cider vinegar are also used as acids to help with dye release.

I decided to do an experiment to see what extent these additives changed the outcome of the henna. Money not being super plentiful around here I decided to only use what I had easily available in my kitchen already. So what I ended up with the following: 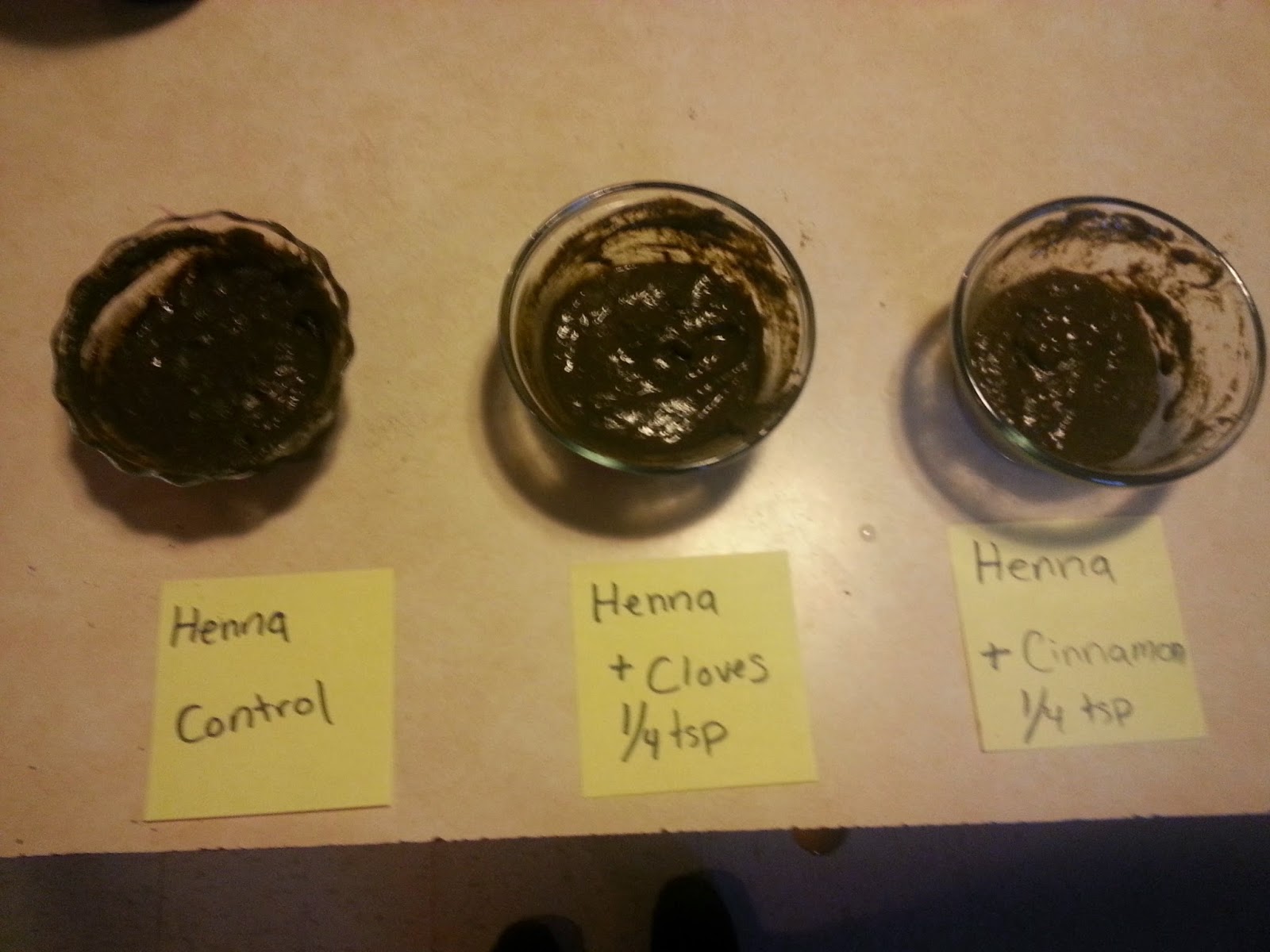 Henna- this was bulk henna which originated from Pakistan. It has a definite orange/red base and long dye release time. 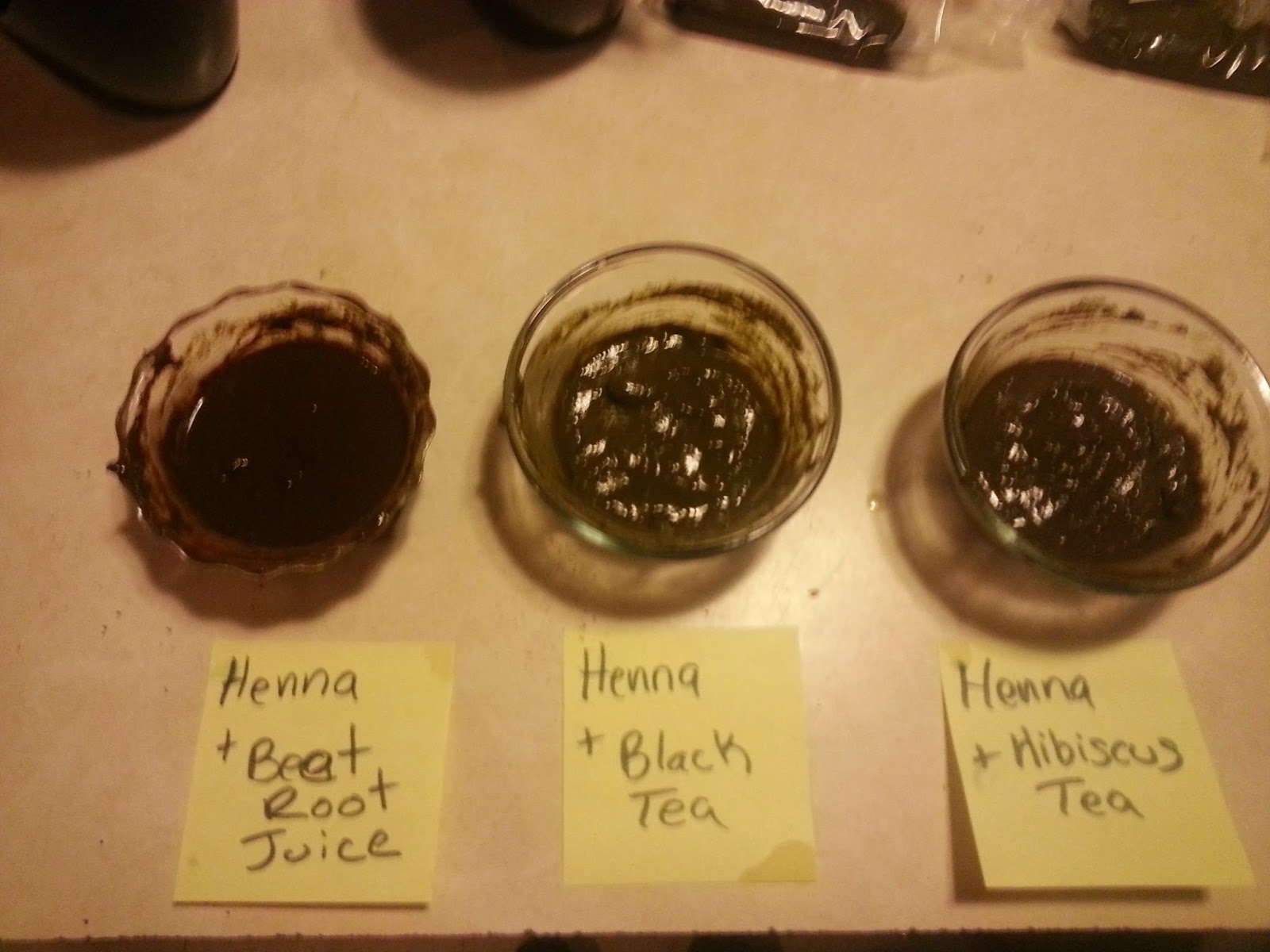 Beet Root-  one can beets (including liquid) plus one can water 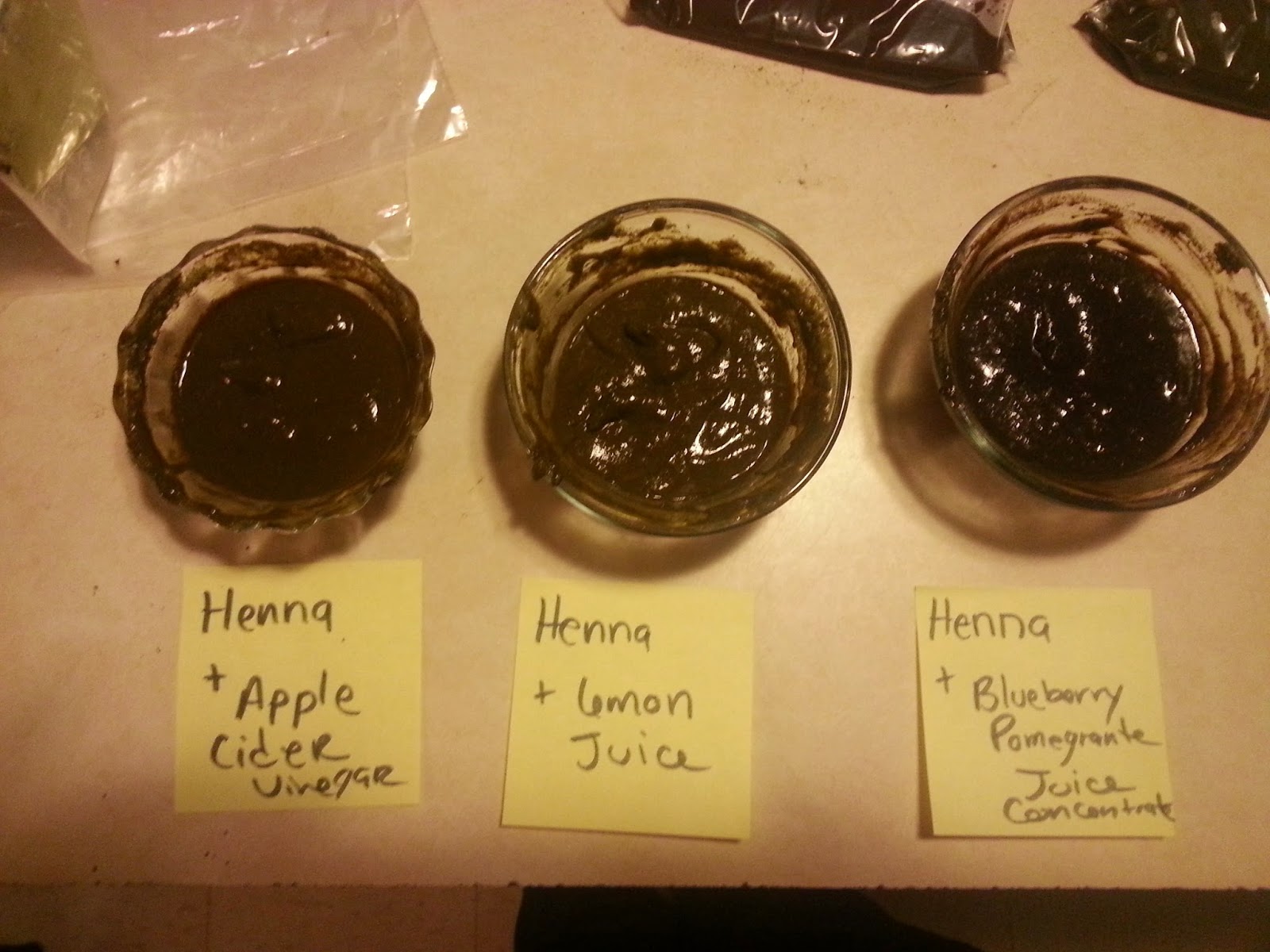 Lemon juice- from concentrate, not diluted

I had wanted to do red wine, but the bottle of wine I had was mislabeled and ended up being a home brewed three year old wild plum wine, and way to yummy to use with henna. I also wanted to do one with an infusion of elderberries since they were often used as a hair dye in ancient Rome but my elderberries are MIA.

Each sample was made with 1/4 cup of liquid warmed to a point just below boiling, plus enough Henna to form a yogurt style paste (about 2 heaping teaspoons). The samples using water (control, cloves, cinnamon, black tea, and hibiscus tea) took less henna to form the paste. My mixing utensils were rinsed between samples to prevent cross contamination. The cinnamon sample became much more gelled than the rest, the blueberry pomegranate also gelled somewhat. The apple cider vinegar smells gross (my opinion). The beets seemed to neutralize the henna smell. The cloves and cinnamon smelled great.


The samples were then placed in separate baggies and set in a warm place overnight (about 12 hours). After sitting overnight all the samples were similar in color with subtle differences, which are hard to see with my phone camera. The cloves were the same color as the control, and the clove scent dissipated some. The cinnamon was slightly more orange than the control, but still had a strong scent. The beet sample was a deeper/darker red. The black tea a leaned a bit more towards a cooler brown, but was not darker. The hibiscus tea had a hint of red, but was not darker. The ACV was the same color as the control, but still smelled awful. The lemon juice sample was the lightest sample, and the blueberry pomegranate was the darkest with a blue tint to it. 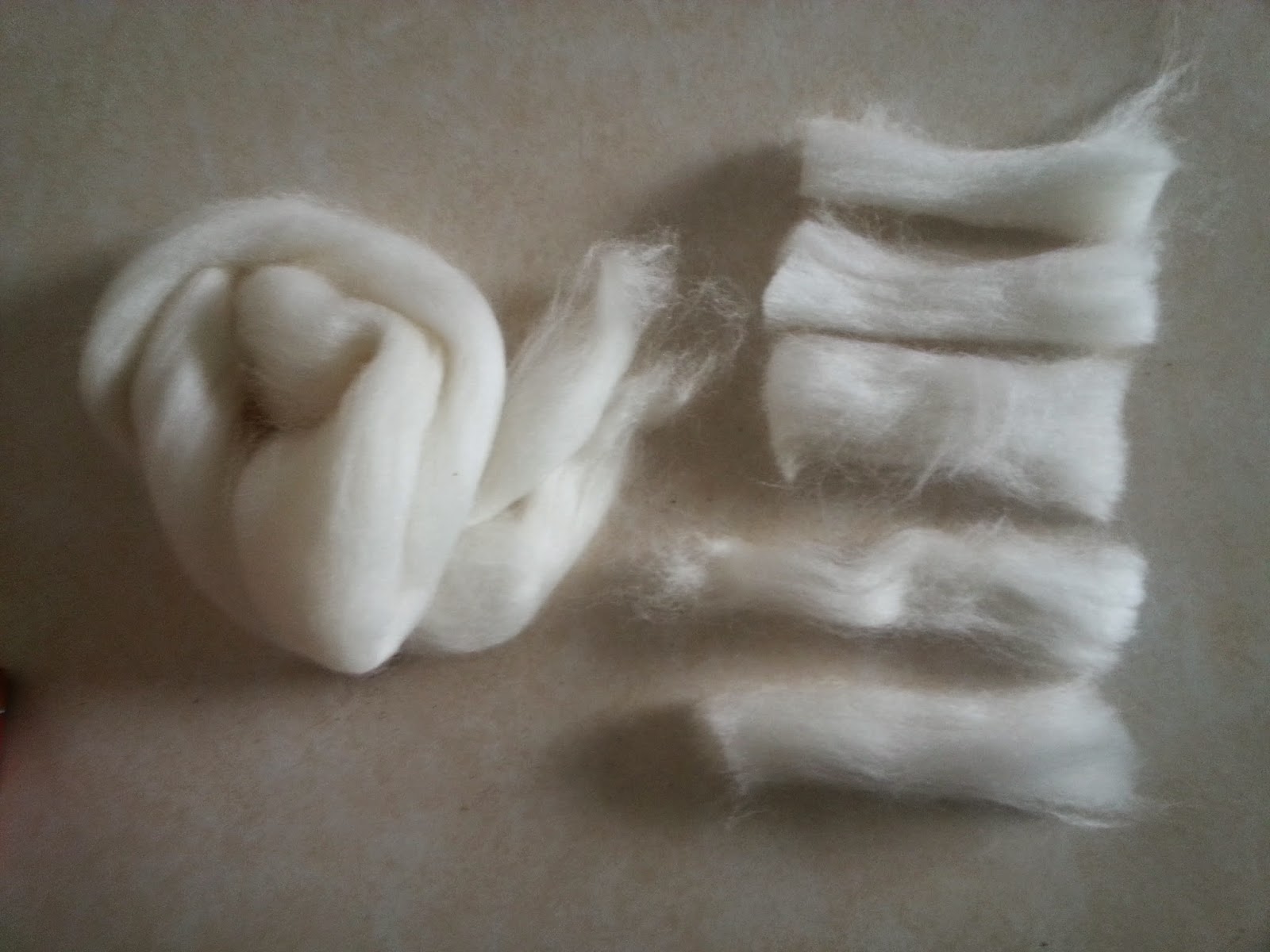 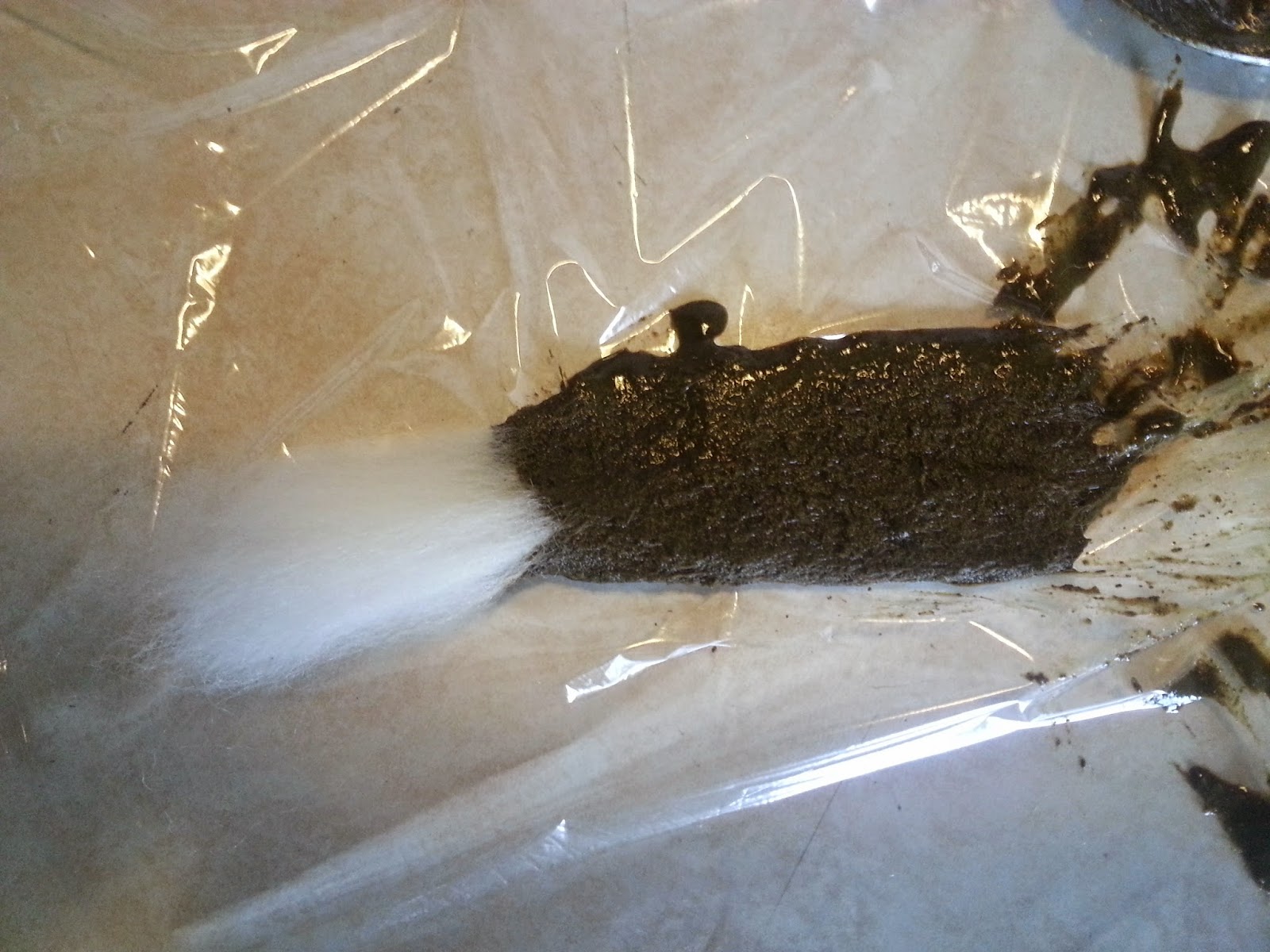 I applied the samples to some white wool roving that was about 1/2" thick, and about 4 inches long. I thoroughly massaged the henna into the wool making sure it was well saturated.  The hennaed wool samples were then placed into thier own baggies and set in my pre-warmed oven (150 degrees) to sit for several hours. The extra from the henna samples were put in the freezer for later use.


After the wool sat in the warmth for 9 hours I rinsed each sample in warm water until the water ran clear. The cinnamon sample took the longest to rinse out, and the blueberry pomegranate one smelled sickly sweet. The samples were then set out to dry.

Cloves- No difference in color or texture from the control. Smells good.

Cinnamon- No difference in texture, but color is slightly lighter and more orange. Cinnamon odor is still fairly strong.

Beets- No difference in texture, but color is slightly deeper red/burgundy. Henna odor slightly neutralized. ETA - further tests shown that this Beet mix was ineffective at dying. So this is a bogus result.

Black Tea- No difference in color, texture, or odor from the control.

Hibiscus Tea- No difference in color, texture, or odor from the control.- ETA - further tests shown that this tea mix was ineffective at dying anything. So this is a bogus result.

Apple Cider Vinegar- No difference in texture, but color is slightly deeper red/orange. Odor is Horrible.

Lemon Juice- Texture is rougher. Wool wanted to felt. Color is lighter in color and murkier than the control. light citrus scent.


My Thoughts
I was actually surprised that there wasn't more of a difference between the samples. Especially with the beets, black tea, Hibiscus, and the blue/pom juice. Some of the issues here may be my methods/materials. Also since the henna mixture sat for quite a long time overnight (it was my day off and I slept in) before being applied to the wool may have affected the efficiency of the dye.

The Beets were canned- so had been heat treated, and salted before hand. Also I may have watered them down to much. If I try again with beets I will use either fresh beets, or beetroot powder.

The Teas (black and Hibiscus) may not have been brewed very strongly. If I try again I will use more tea bags and brew longer.

The Hibiscus tea also was not pure- ingredients are Hibiscus, Orange Peel, Lemongrass, Rosehips, Raspberry, Licorice Powder, and Citric Acid. If I try again I will use a pure form.

The Blueberry Pomegranate juice- No idea what happened here. The Henna mix was almost black. Maybe the sugars in the juice prevented the dye from taking?

I am not all that surprised by the lemon. Lemon Juice is often used as a mild bleach- Mom used to use it as a cheap sun-in as a teen. I have decided to stop using the lemon juice in my future henna mixes- I am not fond of the lighter and murky color or the damage it does.

I will not be using the Apple cider vinegar- I can't stand the smell. I will also not use cinnamon since I am not liking the super orange color, and the Blue/pom juice was just to much of a stick mess.


In a few days I will post a picture of what the sample look like after oxidizing.

Further Experimentation
So I have been playing around with the Beet root mix I made and fresh packets of the Hibiscus Tea. I know from my own past experience with beets that they dye things, and I saw proof on the Burgundy henna thread  on the long hair community that people have had results with Hibiscus- in it's powder or dried flower form.

I took the refrigerated mix I made the other day of the beets and ran it through my food processor. I then boiled it down a bit to concentrate the dyes and tried dying various things in it- an egg, a bit of cotton, and a bit of wool roving. All had the same result- a very faint pink/purple stain. I have in past experience dyed eggs a bright and vivid hue with beets. So I have to conclude that Canned Beets are ineffective as a dye agent.

I open up a packet of the hibiscus tea and was surprised to find that there really was little hibiscus or raspberry bits in the packet. The hibiscus was probably less than a quarter of the tea, although it was the first ingredient listed. I tried dying the same items as with the beets, and had similar results. The color was a very faint murky pink, that specially in the case of the egg just rubbed off. So the this Tea is also ineffective.

Email ThisBlogThis!Share to TwitterShare to FacebookShare to Pinterest
Labels: Henna