So drafting sleeves- I have always just sort of avoided this. I was so concerned with wasting fabric I never "really" drafted them. I would take the measurement of my shoulder, the measurement of my wrist, and length of my arm from both the top of the shoulder, and armpit, add a inch for ease and seams. Voila- simple sleeve like the one to the right, seam placed to run under the arm, and add a gore to fill out the armhole,  never had to worry about right or left sleeve- they were both the same.

But these always had problems. I always had issues with the elbows, special with a few extra pounds. Always ended up with it pinching and digging into my skin when flexing my elbow. Some garments I was able to let out enough to fix this. One I tried to split up to the elbow crease, but was still to tight just above the elbow to be comfortable. So it ended up being short sleeves. Another still I added extra strips of fabrics around the elbow.

So apart from the movement issues, the garments of the 14th and 15th century often do not have seams running down the underside of the arm. Plus they are generally more fitted than I was able to achieve with my uber simple sleeves. Plus It finally got through my stubborn skull- that making a few drafts would probably be worth the time and energy despite "wasting" fabric.

I knew the basic principles of drafting sleeves, and even drafted them for others. So I decided to actually draft my own sleeves. I did some refresher research. Edyth Miller has a post here about sleeves, and a drafting prototype post that I based this sleeve off of. Others of interest include this article by mathildegirlgenius, or this one on Ikatbag. 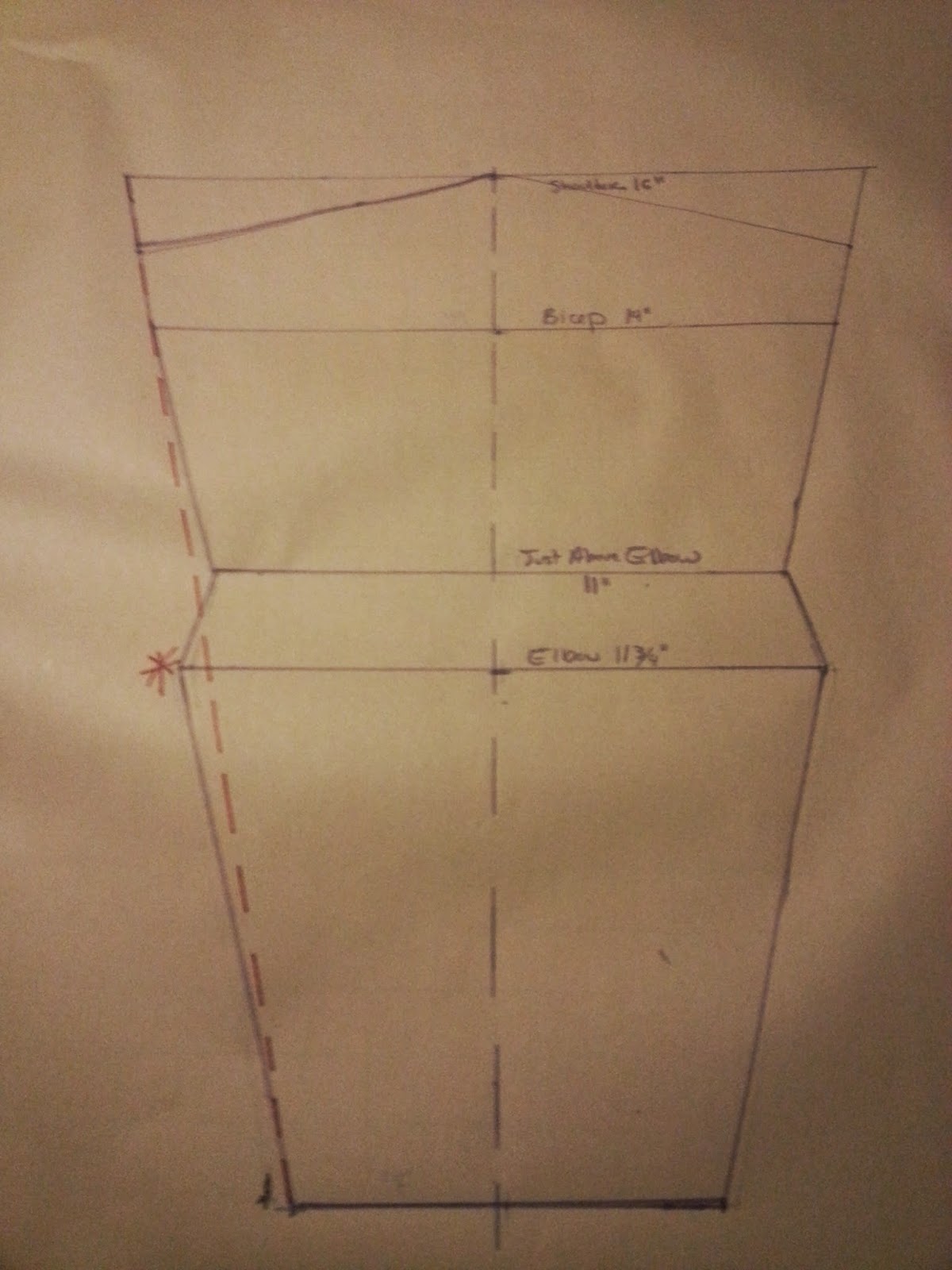 On the Left Is a paper draft in progress for my sleeves. You can see the big difference between my flexed elbow measurement and the bicep just a couple inches above. The red dotted line represents where my old method of sleeve patterning would have been. OUCH!! no wonder I had so many issues. 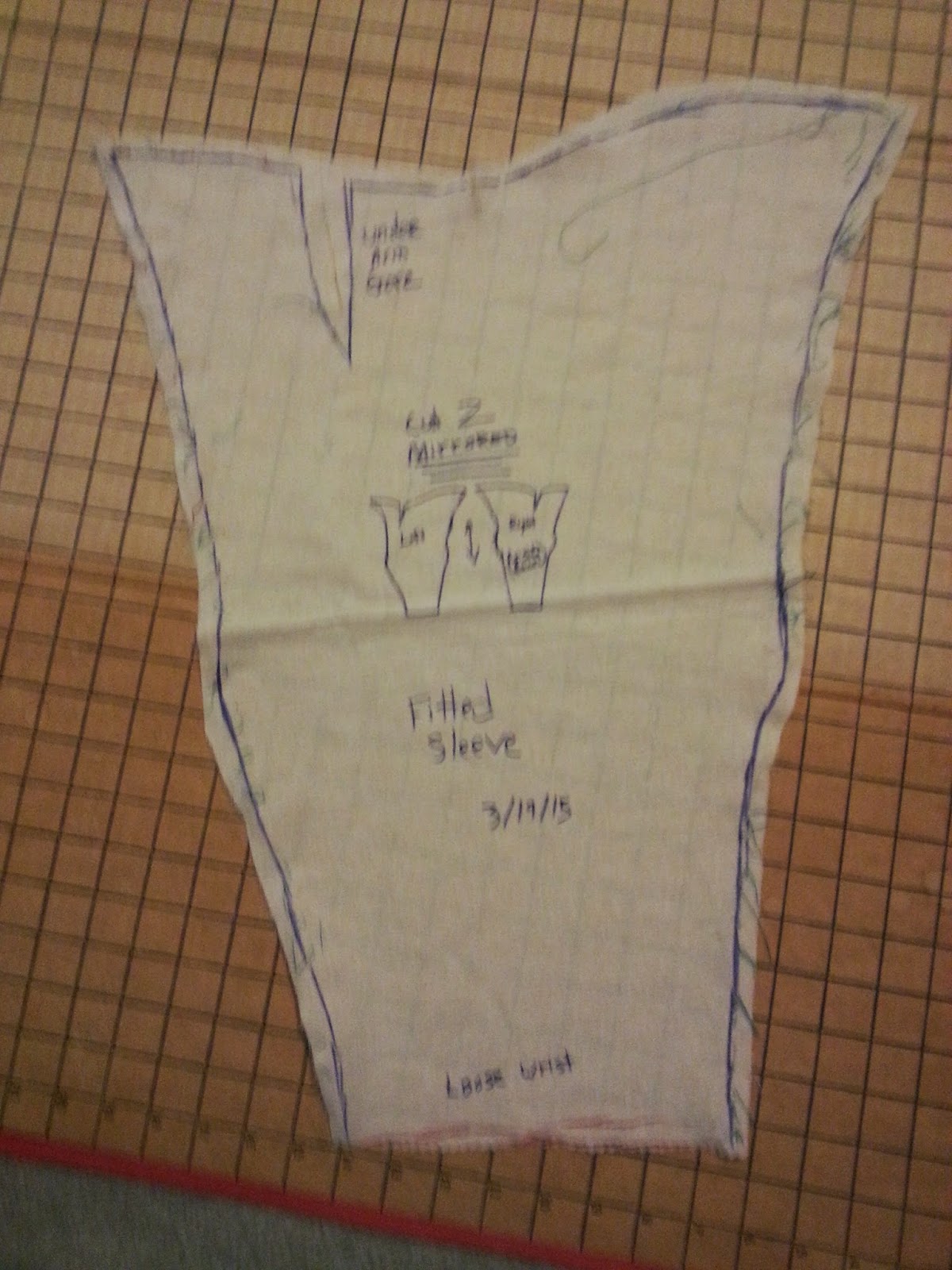 Here is a almost finished pattern. (mock up number 4 I believe) The lines have been smoothed out, the s curve is in, and seam moved to the back of the arm. The first mock up I had I just sewed with the seam on the underside, and marked where I wanted the seam and cut it open- sorry no pics. I had major issues trying to draft out the gore in the under arm, but no matter what I did, it just wouldn't lay right and pulled strangely. Part of this may have been the fact that my armhole for the kirtle I am drafting this for was cut a bit low. I have issues with fabric rubbing in my armpit. So I prefer a small gore to a tight seam.

Also sleeves with this kind of seam placement Cannot go on either arm! I found that out the hard way when trying to figure out why my seam was ended up in front of my arm. 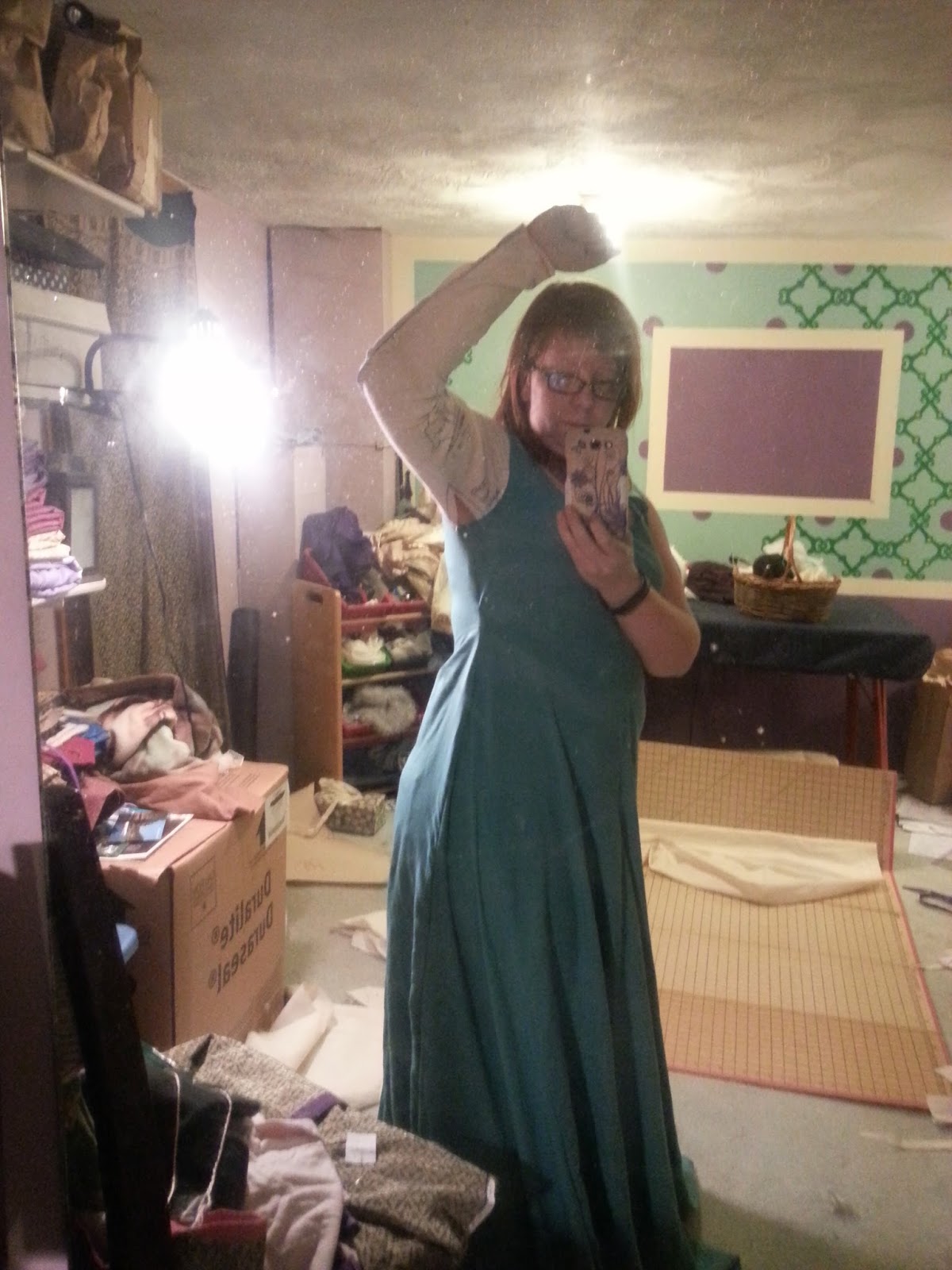 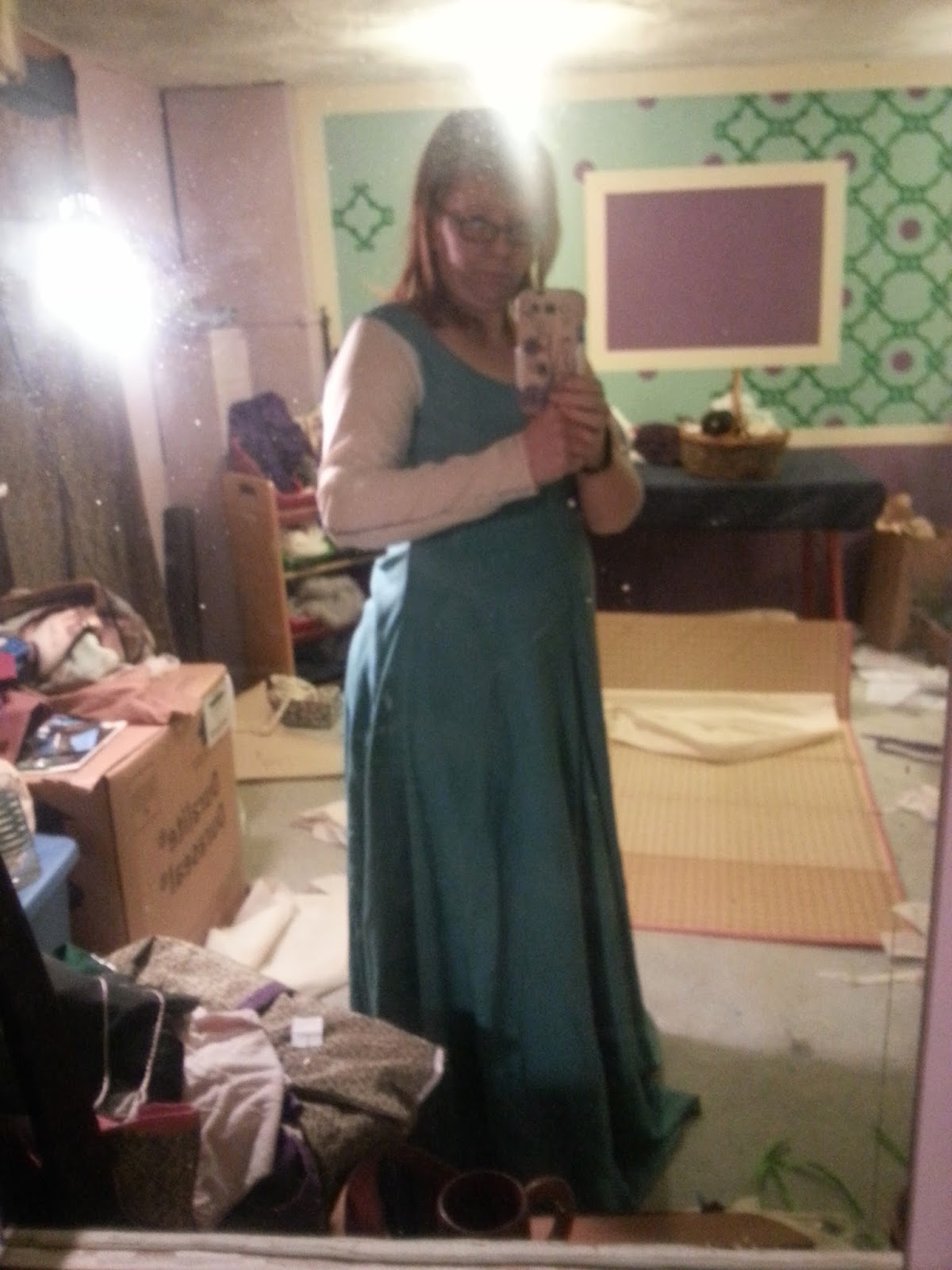 Fitting of the mock up before final tweaking. Full range of movement. Just a bit looser than desired. Please ignore the fact that my craft room exploded behind me, and my kirtle looks awful because I have mundanes under, and still have to take it in around the waist! 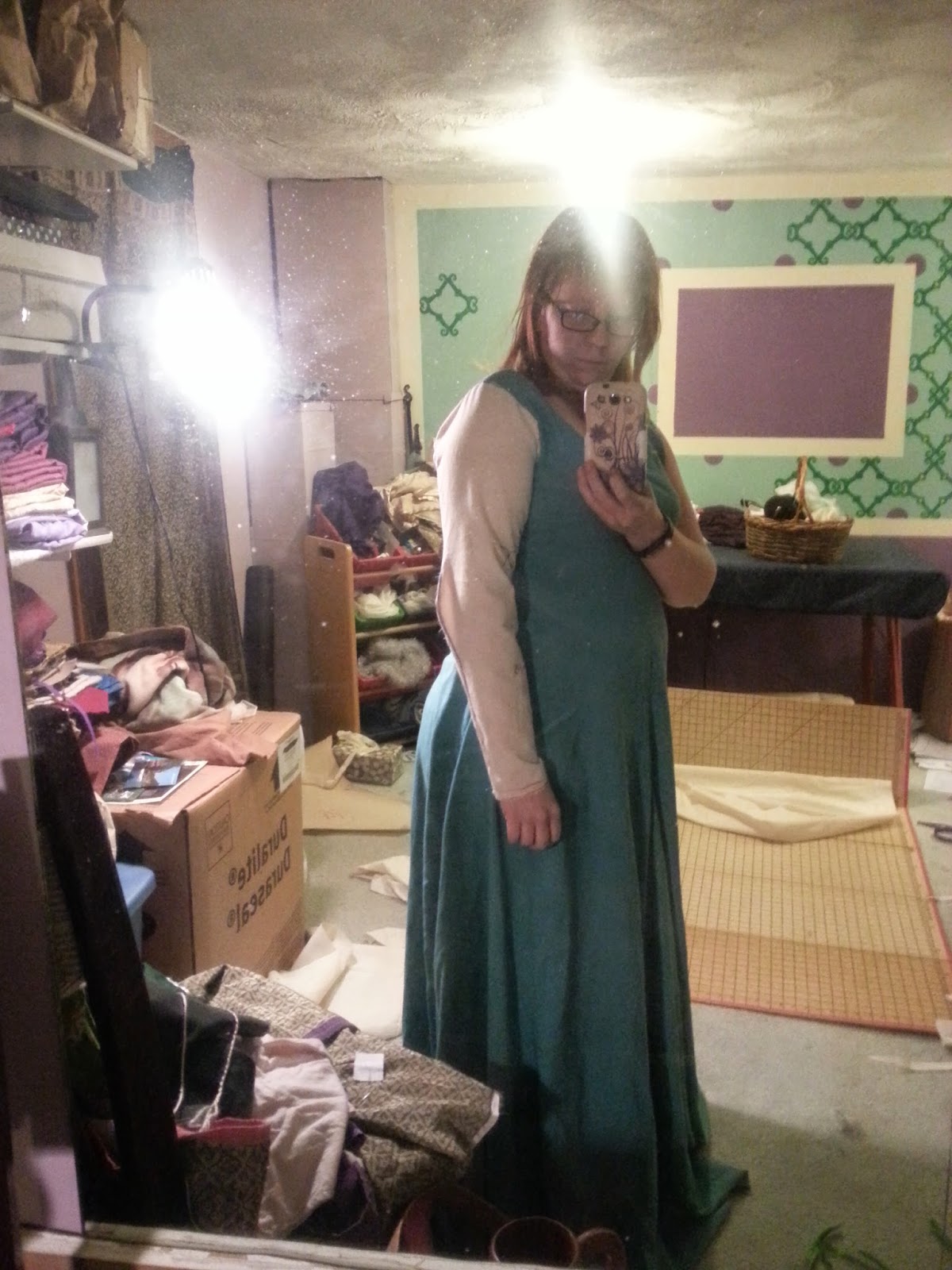 Elbow point is a quite noticeable when arms are straight. 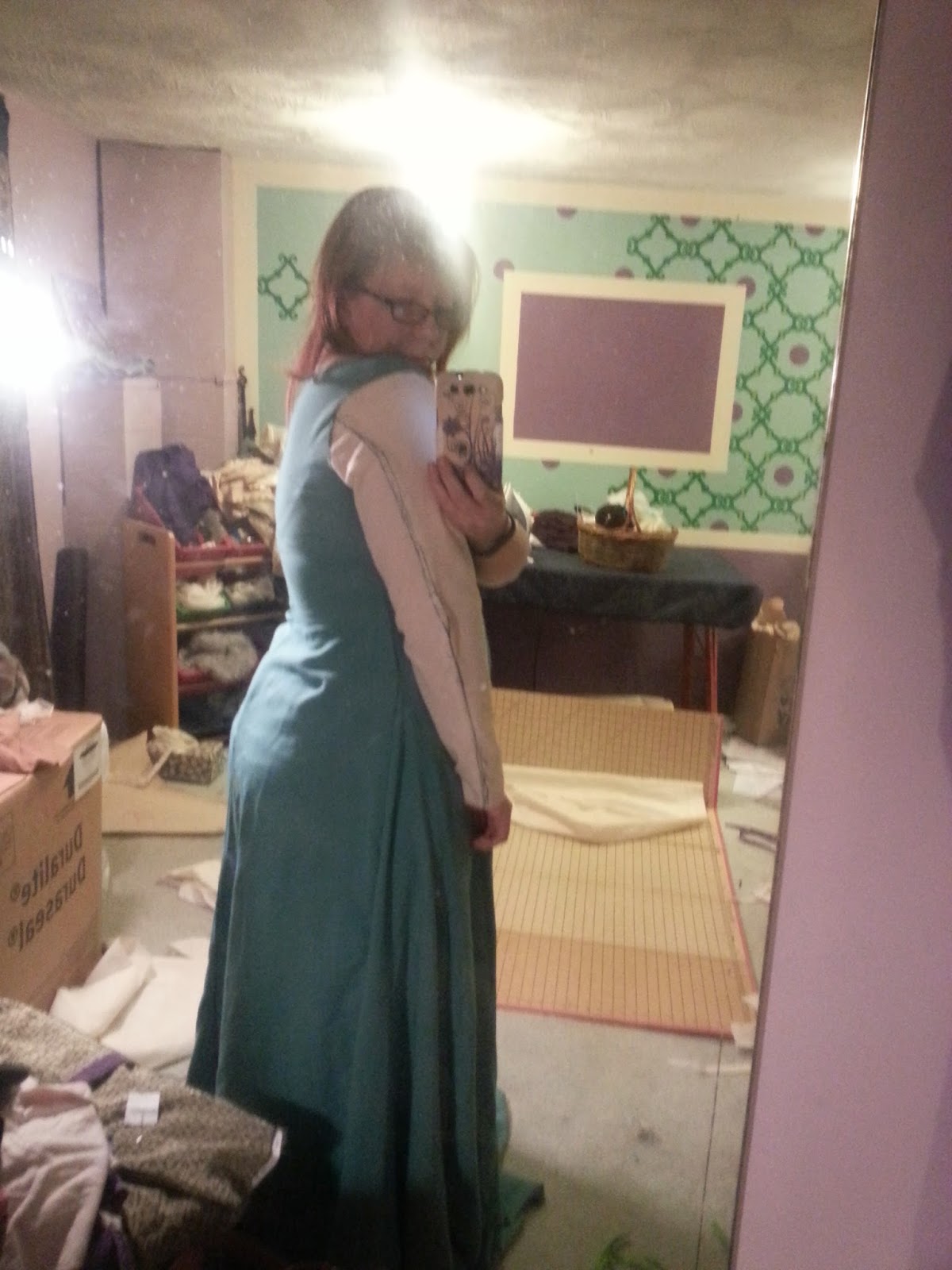 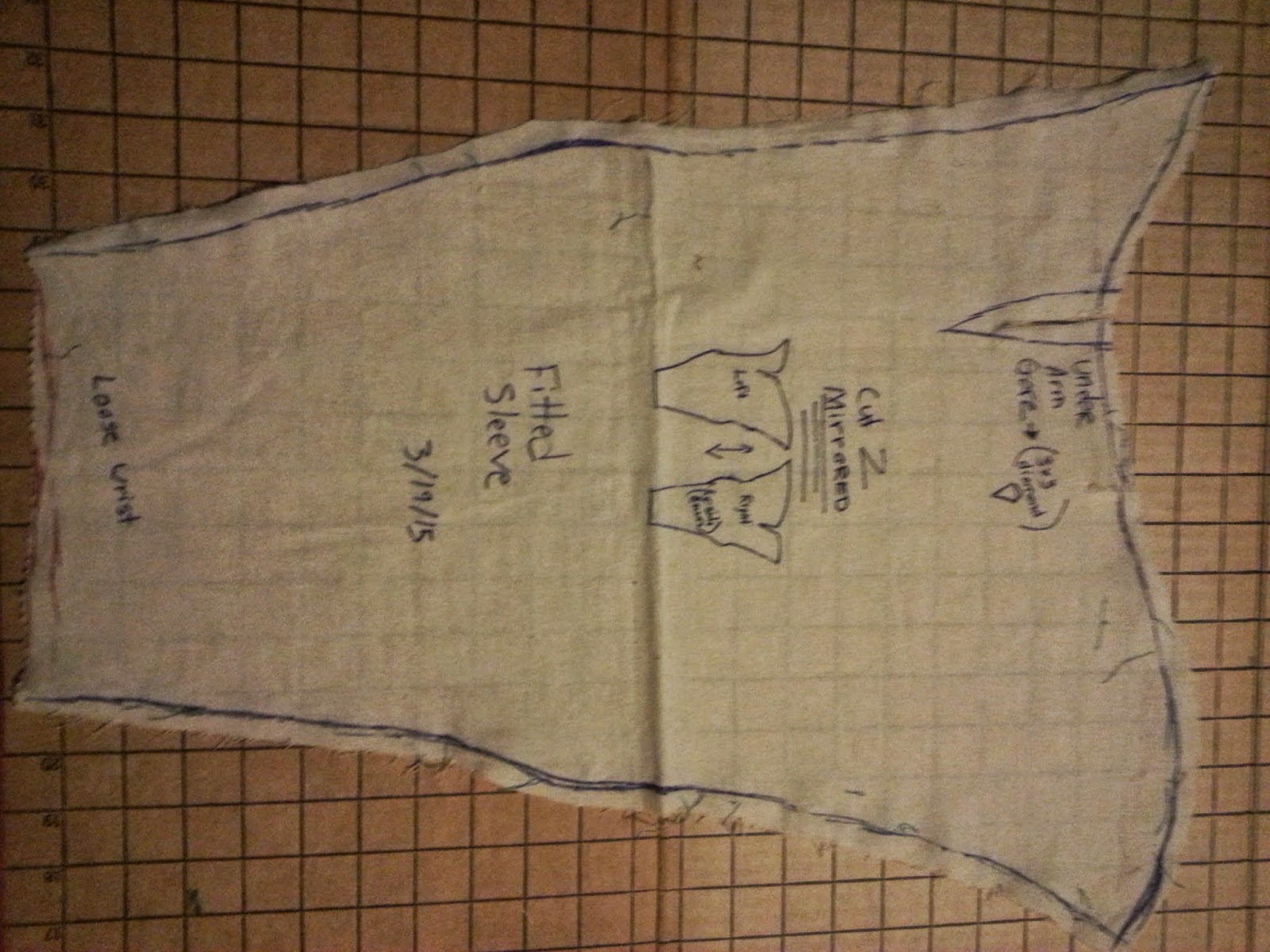 Final pattern ( mock up number 5)- the S curve changed a bit, pattern slimmed down about 1/8th of an inch, and the elbow points smoothed out.

Final sleeves on now finished kirtle. Remember to mirror the pattern and mark which side is inside and which is out on fabric without a wrong side! Other wise you will sew one inside out and end up with 2 right sleeves.  Twice in my case. Grrr. 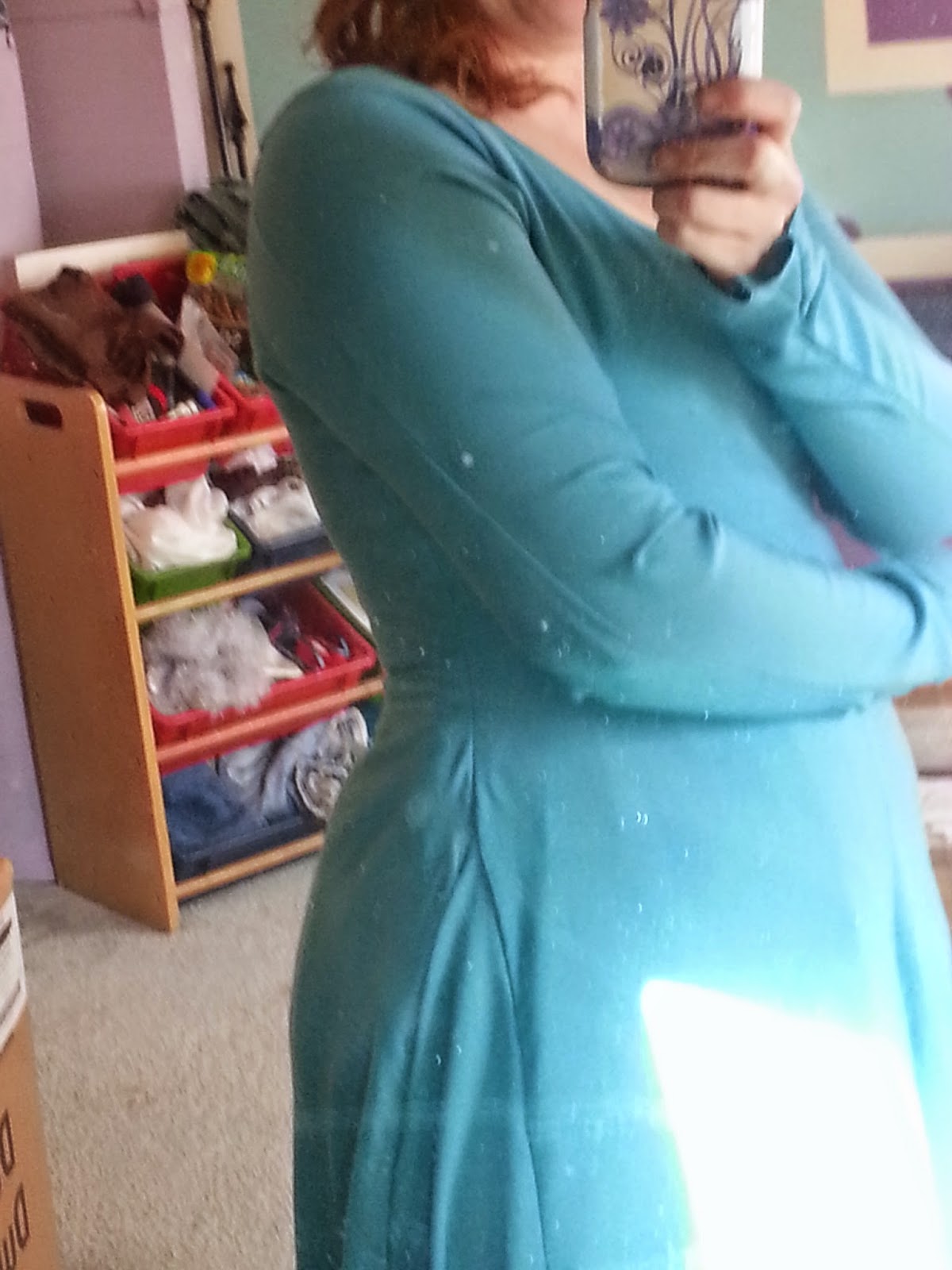 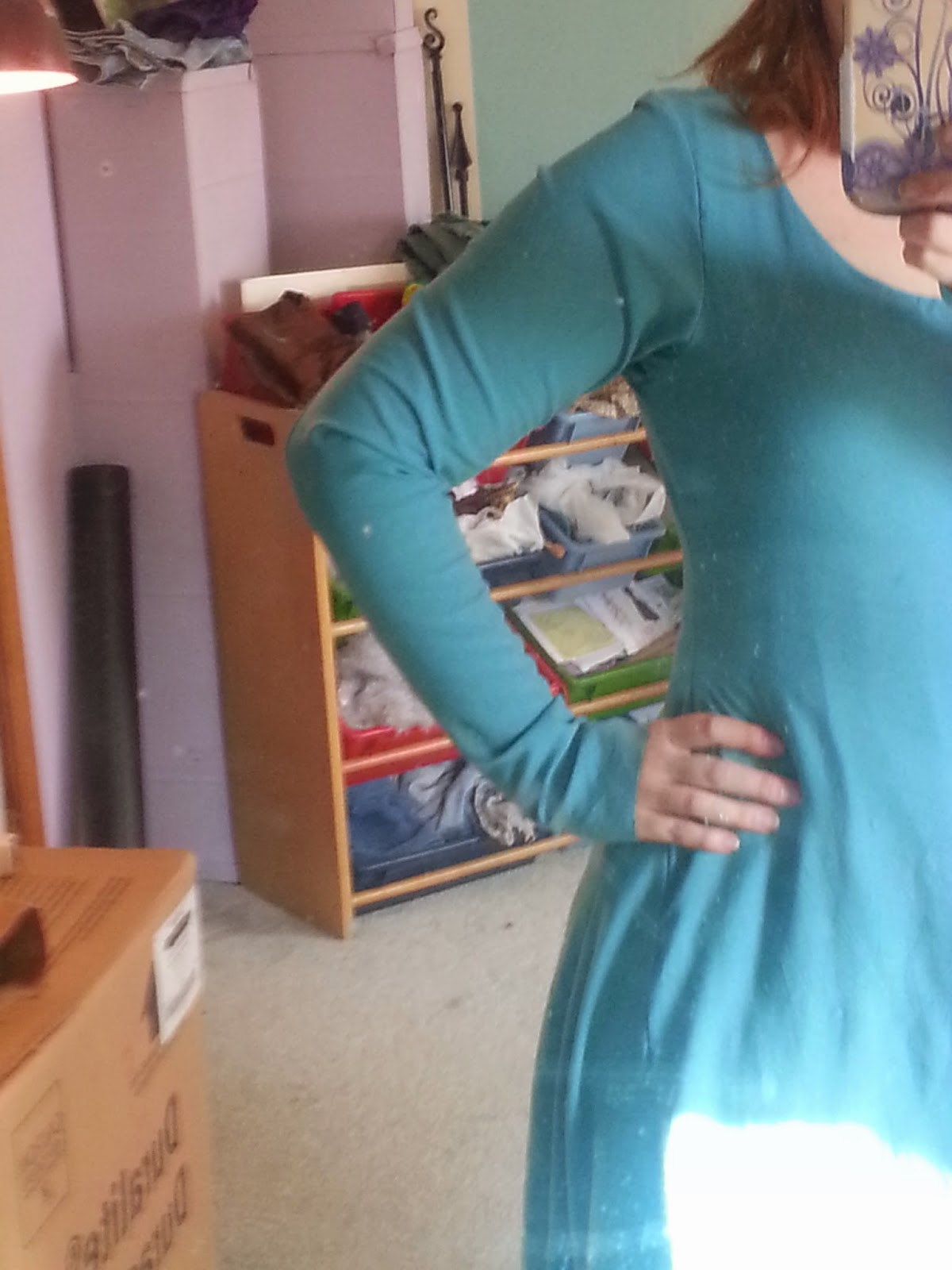 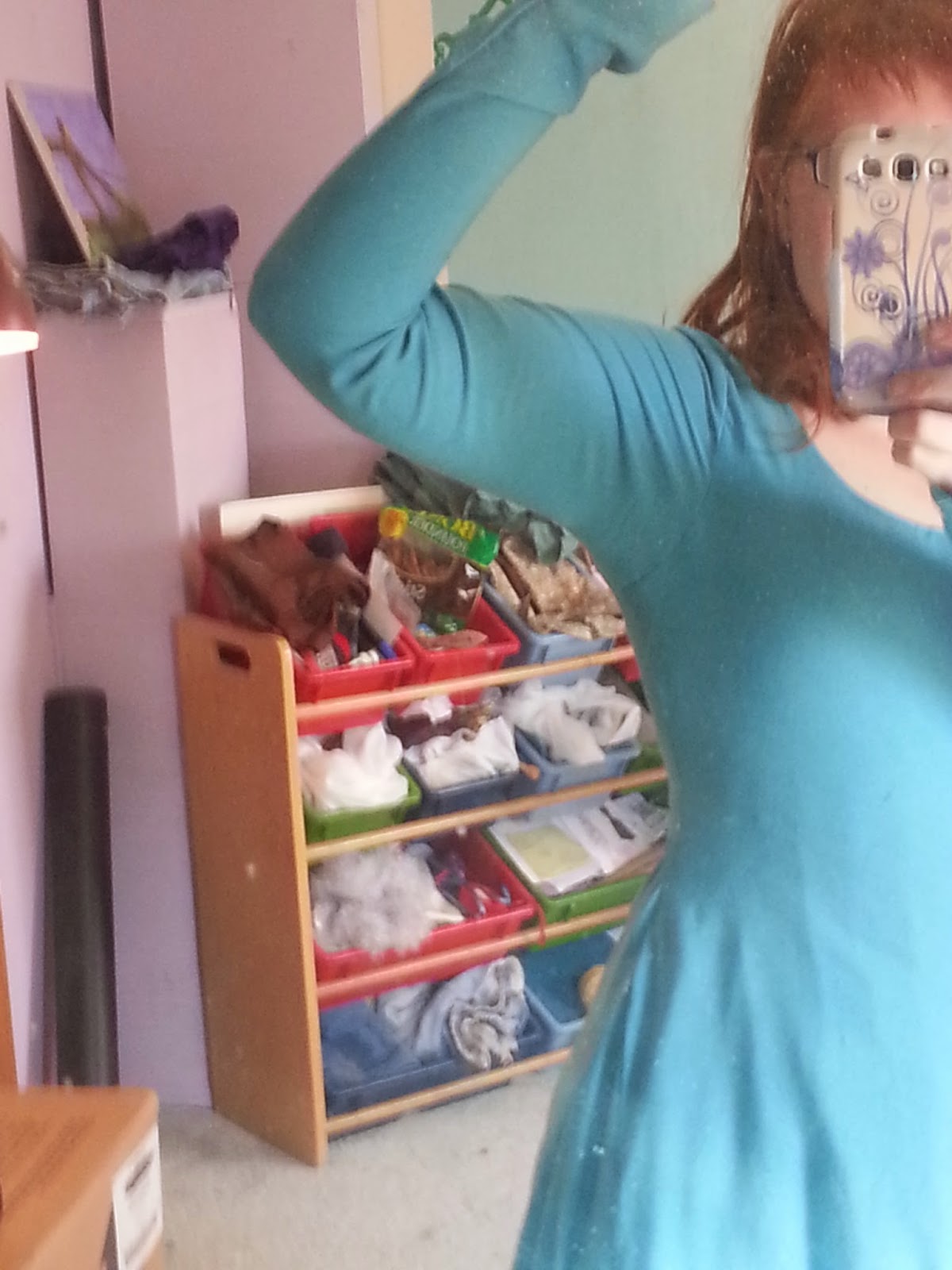 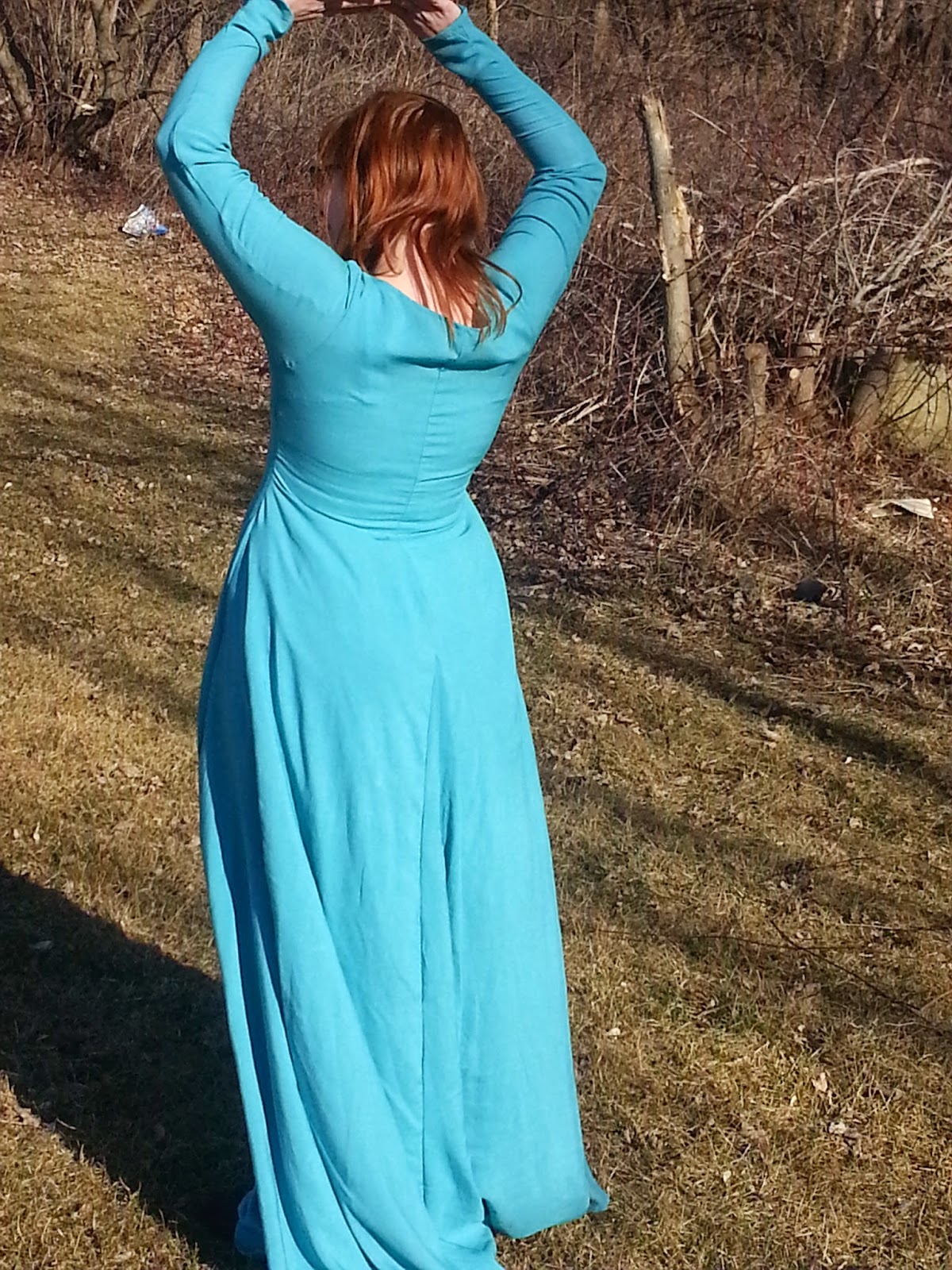 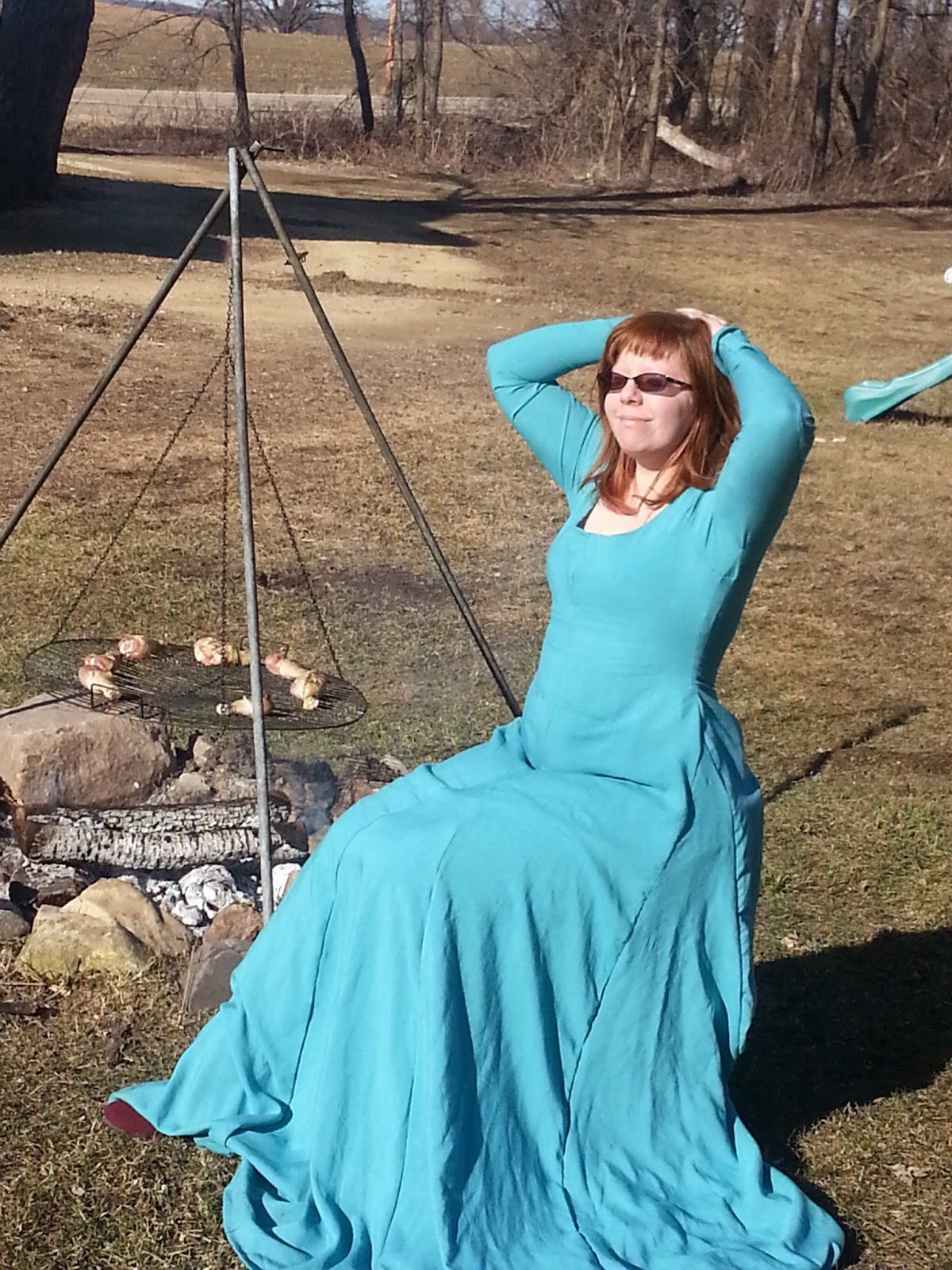