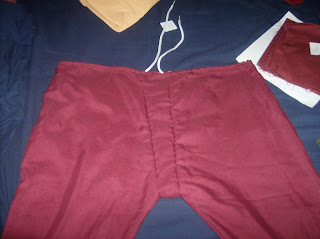 So lets talk about medieval pants. They did exist. There have been several extent pairs of men's trousers discovered in viking and bog finds. See more info and resources here. The maroon pair of trousers that I made for my husband are loosely based on the Torsbjerg trousers. They do not have quite as many gores and or gussets. These pants are also borrow some middle eastern elements  (since my husband has a middle eastern persona). They are baggy in the waist and are tighter in the lower calves, and are closed with a drawstring. So they are a cross between the two.

The pants also have a pocket (at husband insistence). The pocket has been hidden into the seem on the side. It has also been attached to the waist, so that with the slight bagginess my husband can hid items without it being and obvious pocket. Especially since most of his kaftans will cover it.  (** Note to self-  make slits in kaftans to reach said pocket.**)

These pants are made out of reclaimed curtains. The fabric is light and airy with a hint of a sheen and perfect for hot weather. Judging by a burn test it appears to be a natural fabric. I am guessing  a linen or cotton mixed with rayon due to the sheen. All of the seams have been hand sewn except for the original selvedges on the inside of the waist band and the pocket. The seams were all sewn with a running stitch, with a back stitch about every inch. then the raw edges were folded over and tacked down with running/back stitches, with a few whip stitches around the pocket.

Since the curtains were given to me by family, the thread some poly/cotton blend out of my stash, and the drawstring a shoe lace removed from a pair of shoes, this pair of pants cost me nothing to make except time. All in all these only took about 5 hours from cutting to finished pants. 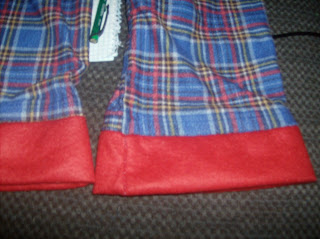 On another note; my son is a bean pole, as such many of his pants have recently become high waters, but otherwise fit him. Several of them have been trimmed to become next years shorts. My son loves his sweatpants and PJ's. One of which pictured on the left was one of his favorites to take to events. (yes I know plaid pj bottoms are cheating, but they are also cheap, easy, and don't take up time to sew for him to grow out of before a blink of an eye, when I was swamped, yadda, yadda... But that will soon change) So I let the hem out, took some scrap felt that was the same weight and softness as the pj's and extended the legs 3 inches. The hem is very deep so can even be let out another two or three inches.

They boy had received some other pj's that fit for his birthday and holidays, so these pants are becoming a permanent SCA garb item. Since these were hand-me-downs to start with these were again a free pair of pants for the garb bag.
Posted by Raven Rose at 2:58 AM