So what do I do on a day where the husband says "NO MORE SEWING!!!"
I make soap.

Soap making is something that was very medieval. Soap is simple- it made from mixing lye and fat.

Simple soap used animal fats mixed with wood ashes, this soap was usually a grayish color, and very harsh. this soap would be used by peasants or for laundry. Traditionally lye for bathing soap was obtained from filtering water through ashes. The resulting water could be then concentrated by boiling it down. This could be very dangerous. Then olive oil was mixed with the lye water to create castile soap. Herbs and scents could then be added to this soap. Castile soap was generally made by guilds and was considered a luxury item, so was heavily taxed, that usually only the rich could afford.

Some History links about soap-
http://www.livinghistory.co.uk/homepages/historicalballs/History%20of%20soapmaking.htm

So here is how I made soap. I have made soap several times before being involved in the SCA, due to my SLS allergies, and still do so about once a year, so this is not a new process for me. I am not exactly sure if medieval soap would be made the same way or not, I need to do more research, But I do know that medieval lye did not come in nice neat 16 oz crystals that I will be working with. This website is an excellent starting place if you choose to make your own soap. 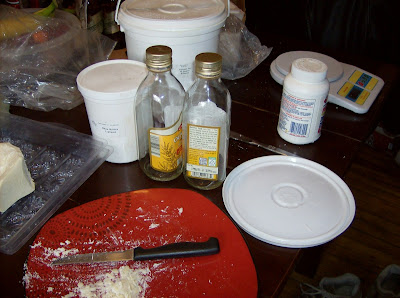 So here is a pic of some of my ingredients. I used olive oil (plain-not virgin or extra virgin), Coconut oil,  rendered deer tallow (not in the picture) and some small amounts of coco butter and shea butter.  The coconut, and the coco/shea butters would probably not have been commonly used in period. I have used them to improve lather, moisturize, and to make sure the soap doesn't melt so quickly in the shower. They also quicken the time spent stirring. 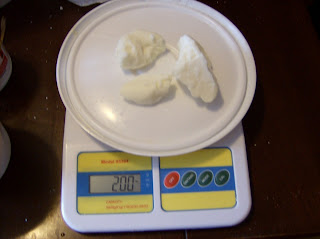 I measured the weight of all my oils individuality, then inputted the information into a lye calculator to determine how much lye, water and oils I need. Since my lye had become one big chunk from the moisture in the air, I had to add some canola oil to use the whole pound of lye. A very general estimate is for every 2 lbs (32 oz) of fats- 4oz of lye crystals and 8 to 12 oz of water are needed. I had a large batch, 120 oz of oil, a 16 oz container of lye and about 35 oz of water. This makes sure there is about 5% extra oils to make sure the soap is not harsh. This is called super fating  I wouldn't go over 10% super fat otherwise soap be soft, will melt easily and may go rancid. A lye calculator would probably not have been used in period, but I am sure that there were general rules of thumb that were followed. 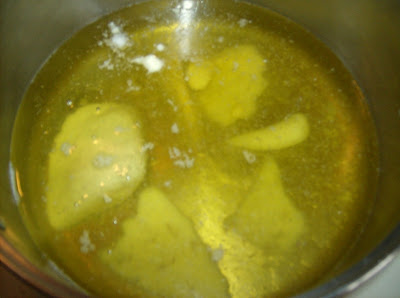 So after I have all my ingredients weighed out, I put my fats and oils into a stainless steel pot and turn the heat on med/low to melt the tallow and warm them. Make sure this is big enough to eventually hold the lye and water. DO NOT use aluminum anything, the soap making process will corrode and pit the aluminum, while turning the soap grey. 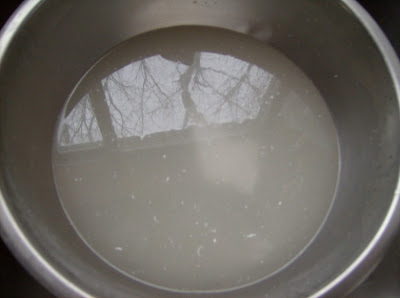 While the oils are warming up add the lye to the cold water. Gently stir until crystals are dissolved.

Caution- Make sure you are not using aluminum or plastic! Use gloves and eye protection. Lye is very caustic and will cause burns. It also becomes very hot very quickly so start with cold water, and it will melt some types of plastic. Make sure you are always pouring the lye into the water, otherwise you can get explosive reactions. If you do get lye on you rinse with cold water, hot water will cause pores to open and create worse burns.

Also it is recommended that any utensils used for soaping not be used for food. Although in all fairness I do not. In fact my soaping supplies stay the cleanest in the house. Although I would not recommend this if using wooden utensils.

When the oils are melted and the lye dissolved let them both cool. The lye should be about 90 degrees and the fats slightly warmer at 100 to 120 degrees. I usually test this by touching the outside of the container- the fat should be hot but not burning to the touch and the lye just slightly cooler. 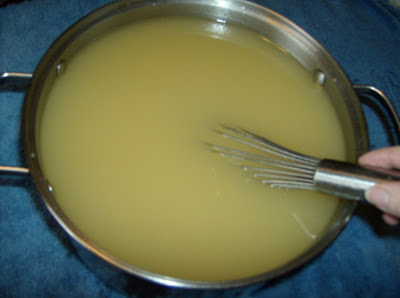 Then slowly pour the lye mixture into the oils/fats. Lightly mix. The oils should go from a clear golden color to an opaque cashew color. (you should still have gloves on at this point)

Then you stir, and stir and stir some more. How long you stir depends on which fats and oils are used. Animal fats general set up much quicker, where as pure olive oil may have to be stirred for days by hand. I had stirred this batch for about 30 mins by hand before resorting to my immersion mixer. 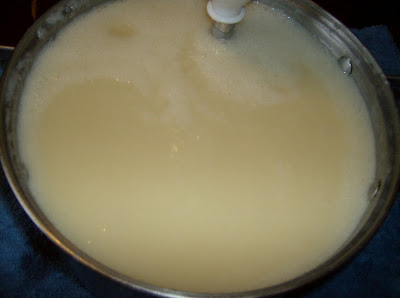 As you stir you should notice the soap getting slightly thicker and lighter in color. 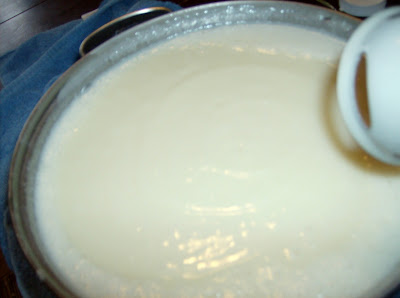 After about 10 Minutes with the hand mixer my soap reached the trace stage. Trace is just like what it sounds like lifting up your soon leaves a slight raised trace on the surface. The whole mixture is almost white and resembles freshly mixed instant pudding. Stop Stirring. NOW. 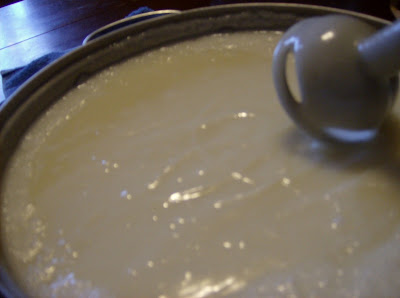 Another picture without the flash where you can see the trace better. This is the point where you can add scent oils, colored waxes or herbs to the mixture. (melted crayon pieces are cheap and easy colorants if you have children) Be cautioned that sometimes these items make the soap set up much quicker. Then pour into molds. The molds should be food grade if clear plastic. I have used cardboard  and wood lined with wax paper. Oiled pvc tubes have been used by others for round soaps. At this point in time it is safe to touch the raw soap with your hands, although it is still harsh. 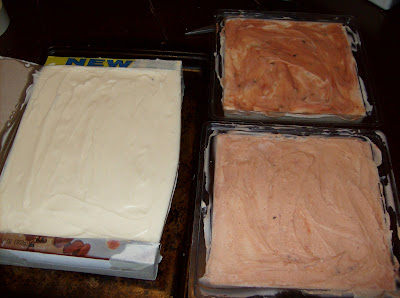 I used a empty cereal box for a large amount of unscented soap, and two smaller molds for scented soap to which I added some vitamin E for my itchy skin. I also used a bit of green food coloring (which the lye discolored into a earthy red/ dusky pink) to help tell apart the scents later. I had waited too long to get my soap into the molds, (or over stirred it) so I ended up spooning it into the molds, so my soap will not be quite as smooth and may have a few air bubbles.

After pouring into the mold you may cover it with a towel for 24 hours, although I generally don't. During this time the soap may put off a lot of heat (just warm to the touch not hot) as it sets up.

After a day or two the soap should be able to be unmolded and cut into bars. The surface may look somewhat chalky. Make sure it is solid all the through or hasn't separated. If it has separated, it can be remelted (slow heat with some more water) remixed, and set out to cure again. Batched soap can almost always be salvaged, although remelted soap has a slightly different texture. Using an immersion blender helps to prevent separation.

After cut into bars the soap should be stacked in a way air can circulate around them and stored in a cool dry place for at least 4 weeks. The longer the soap cures the less harsh it will be.  Be forewarned that soaps with lots of excess fats/oil can and will go rancid, if in a warm place, they also will melt. A very unpleasant mess.

Some finished soaps from a couple of years ago. I estimate that this batch of soap cost me about $35, (mostly because the olive oil was on sale and the tallow free) and will yield about 40 four oz bars. On average it costs me about $1.25 per 4oz bar of soap, more if I use organic ingredients.

I often will shread a bar up to make laundry soap. ( One quick note about the laundy soap recipe- Using distilled water with the laundry soap make it gel up very nicely, some hard waters will not gel otherwise)